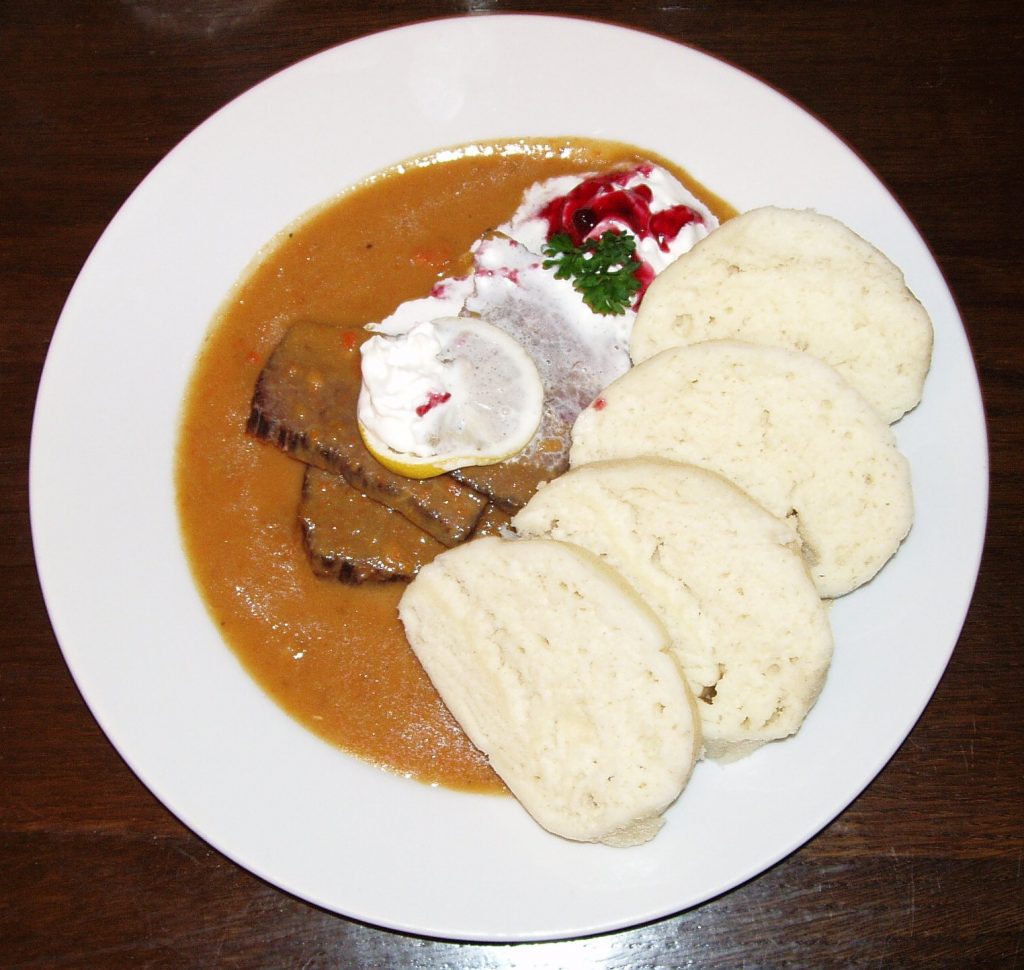 Svíčková na smetaně (“Sirloin roast on cream”) is a traditional dish of Czech cuisine. It is often referred to in short form as Svíčková. As the name suggests, this is beef roast in a creamy sauce, often accompanied by Bohemian dumplings (knedlíky). If other meat, usually pork, is used instead of beef, the dish is often called falešná svíčková (“false sirloin”).
Svíčková is also served with whipped cream, cranberries, and lemon. At first, I found the concept of whipped cream on meat strange, but it is really delicious! 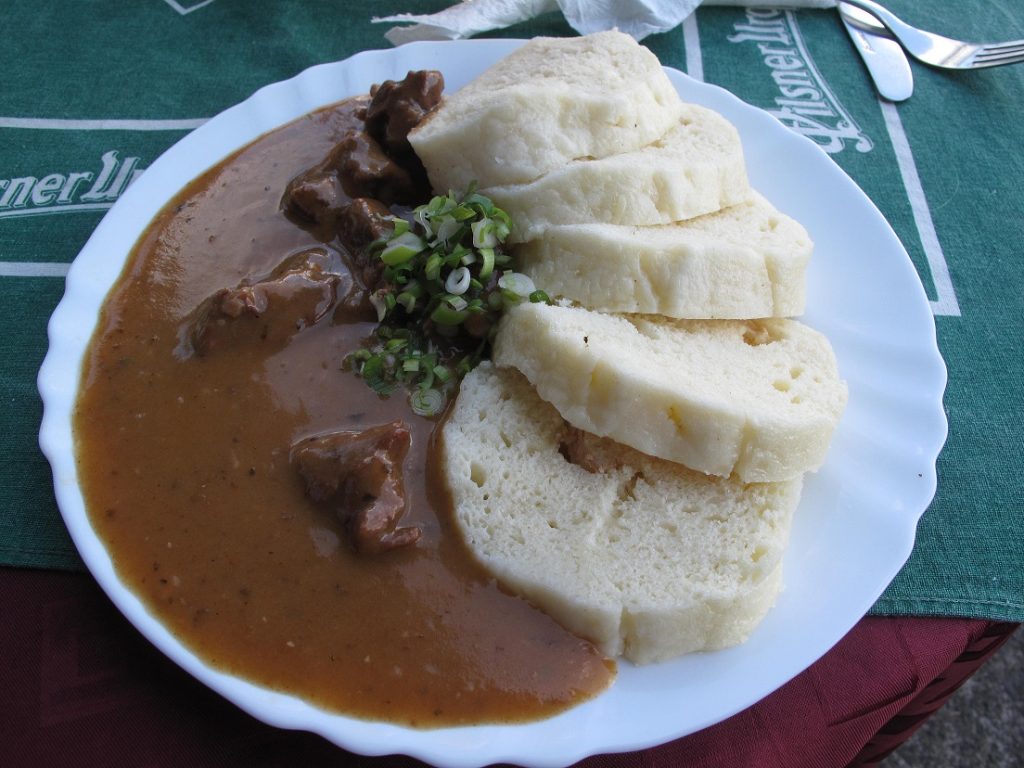 Guláš has its origins in Hungarian cuisine and is one of the most common meals in the Czech Republic. Traditionally, it is a meat stew served in a hearty paprika sauce. It is usually served with Bohemian dumplings or bread. There are different variants, each consisting of a thicker or thinner broth. Different kinds of meat can also be used or potatoes can be added. 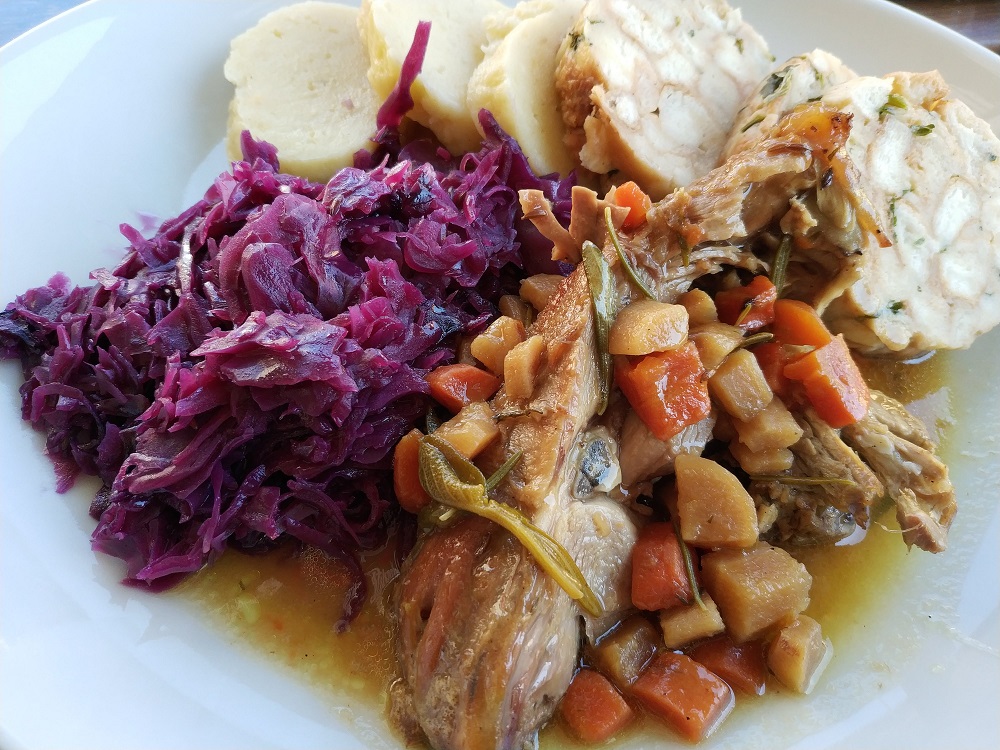 Another dish with Bohemian dumplings, this time they are even in the name. Vepřo knedlo zelo translates as pork dumpling cabbage.  And that’s pretty much what it is. This dish is very reminiscent of German cuisine but has become much eaten national dish Czech.
Usually bread dumplings are served with the roast pork and sauerkraut, but occasionally potato dumplings are served as well. And occasionally the sauerkraut is replaced with red cabbage (see picture). 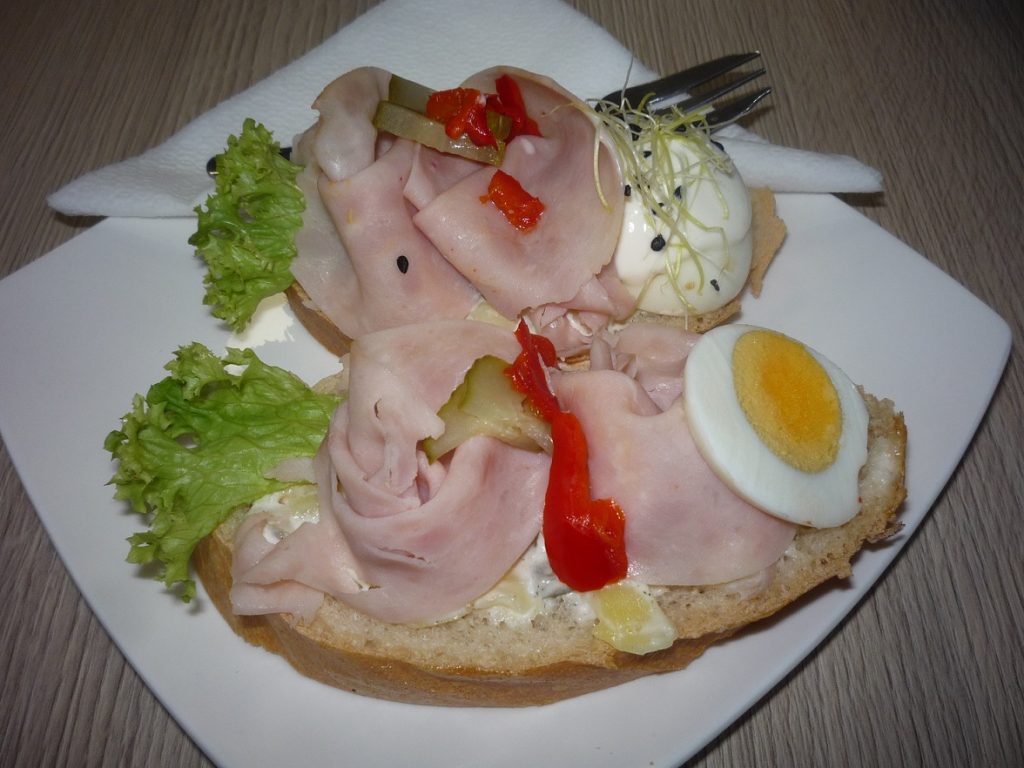 What at first sight looks like a simple open sandwich has a sophisticated feature. Unlike other sandwiches, potato salad is sometimes added as a spread. And it is incredibly tasty!

Obložené chlebíčky (“garnished bread”) can be found in both Czech and Slovak cuisine.  They are topped with various toppings and garnishes and are often served as an appetizer or snack. They can be topped with various types of sausage, salmon, eggs, cheese, cucumbers, tomatoes, and much more. In addition to potato salad, chlebíčky are also popular spread with cream cheese and lobster paste. 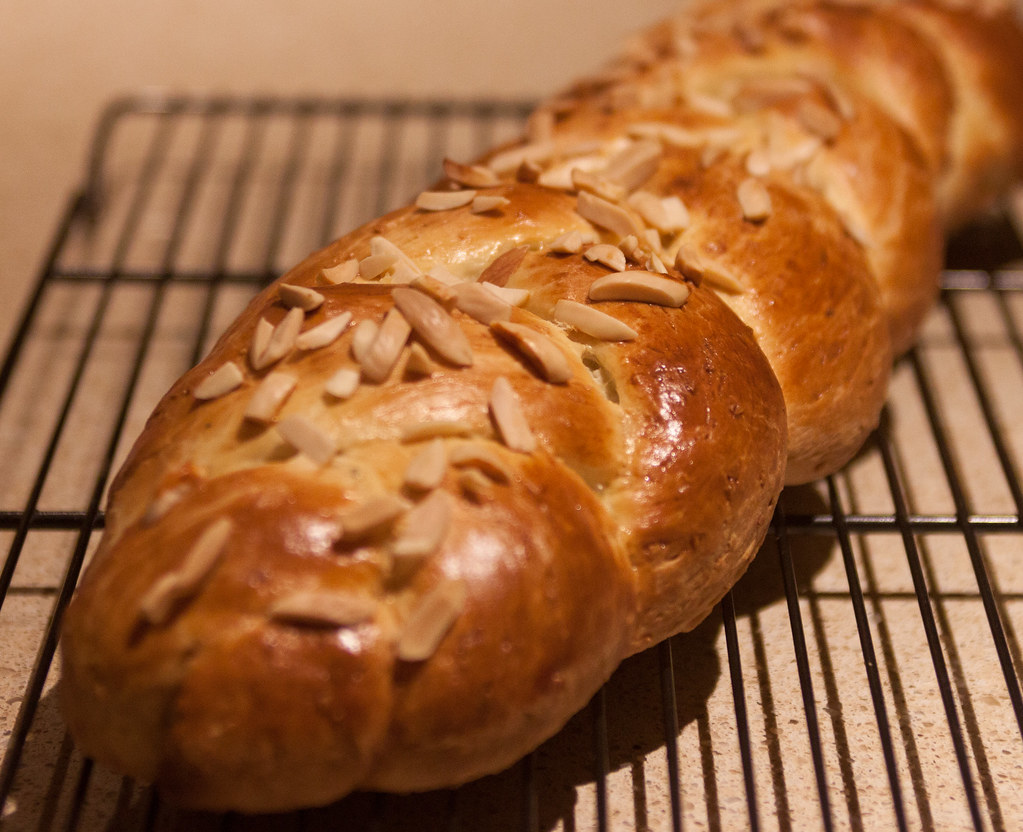 Houska is a popular braided Czech yeast bread. It is made from wheat flour, water, yeast, salt, and occasionally eggs. It is often also sprinkled with sea salt and either caraway or poppy seeds. It has a fluffy soft texture and tastes great spread with butter and jam or topped with savory toppings. It is especially popular for breakfast and is widely available in Czech bakeries, or even supermarkets. 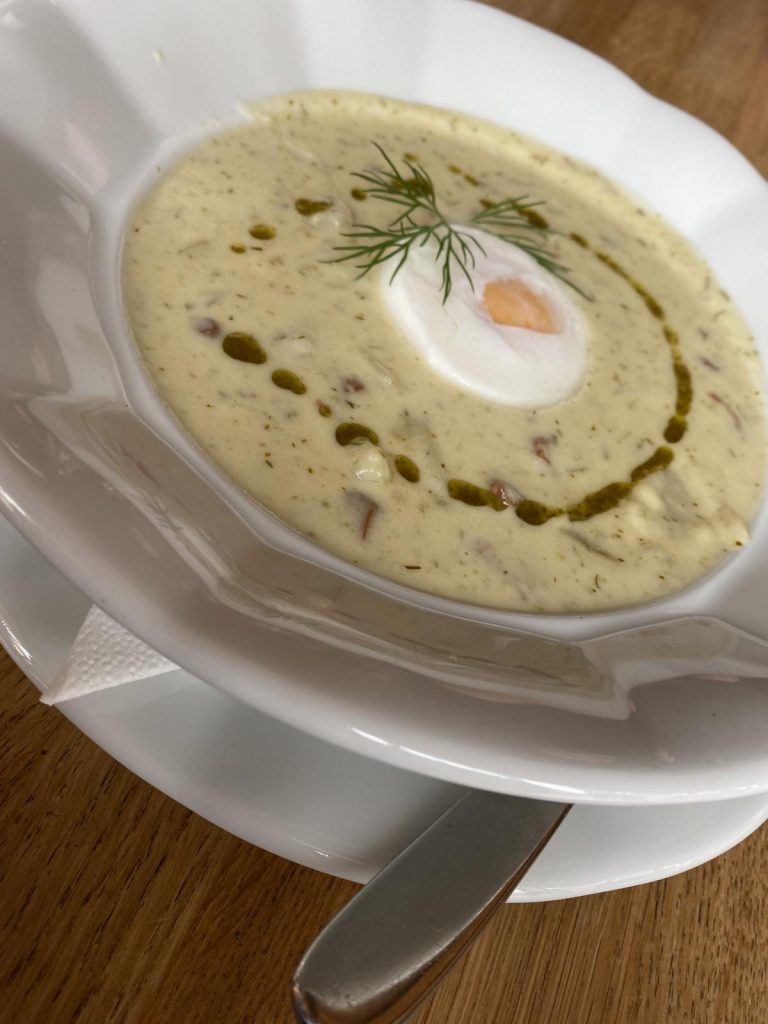 “Jihoceska kulajda” by Radek Schenk is licensed under CC BY-SA 4.0.

Kulajda is a thick soup of Czech cuisine, made of potatoes, sour or sweet cream, wild mushrooms and poached eggs, seasoned with dill. Some regional variants also use vinegar, which gives the soup an intensive sour taste. The soup is especially popular in the cold winter season. 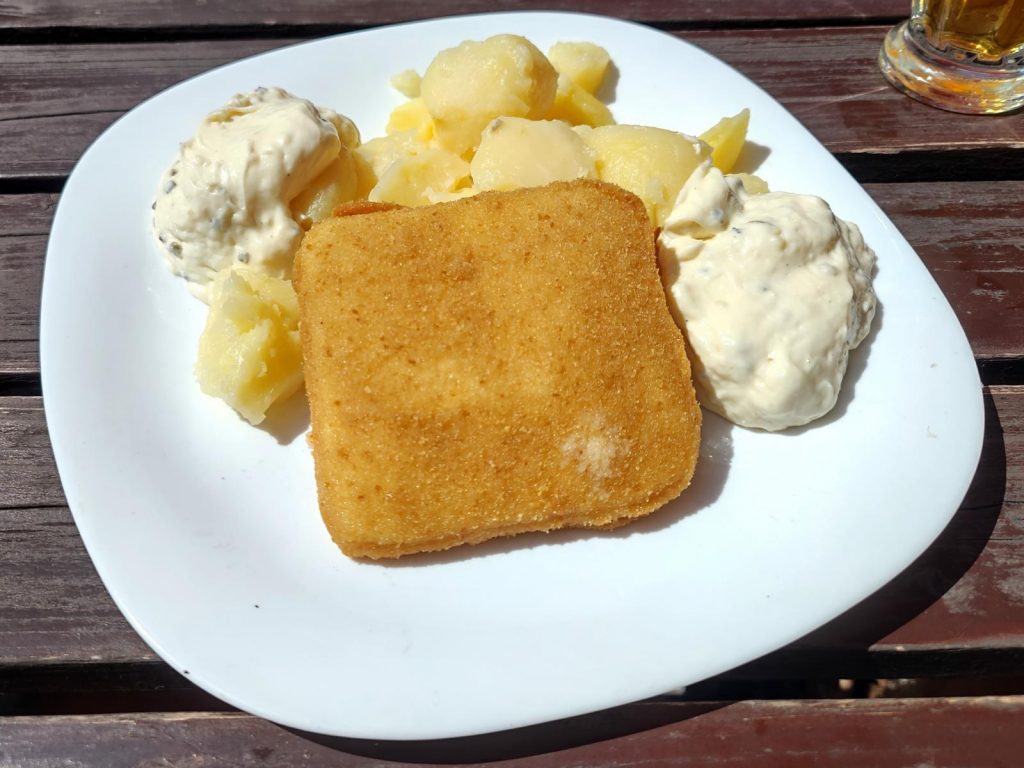 Smažený sýr means fried cheese and is exactly that. It is a popular street food in the Czech Republic and is often served with boiled potatoes, French fries, or bread and topped with tartar sauce or mayonnaise. 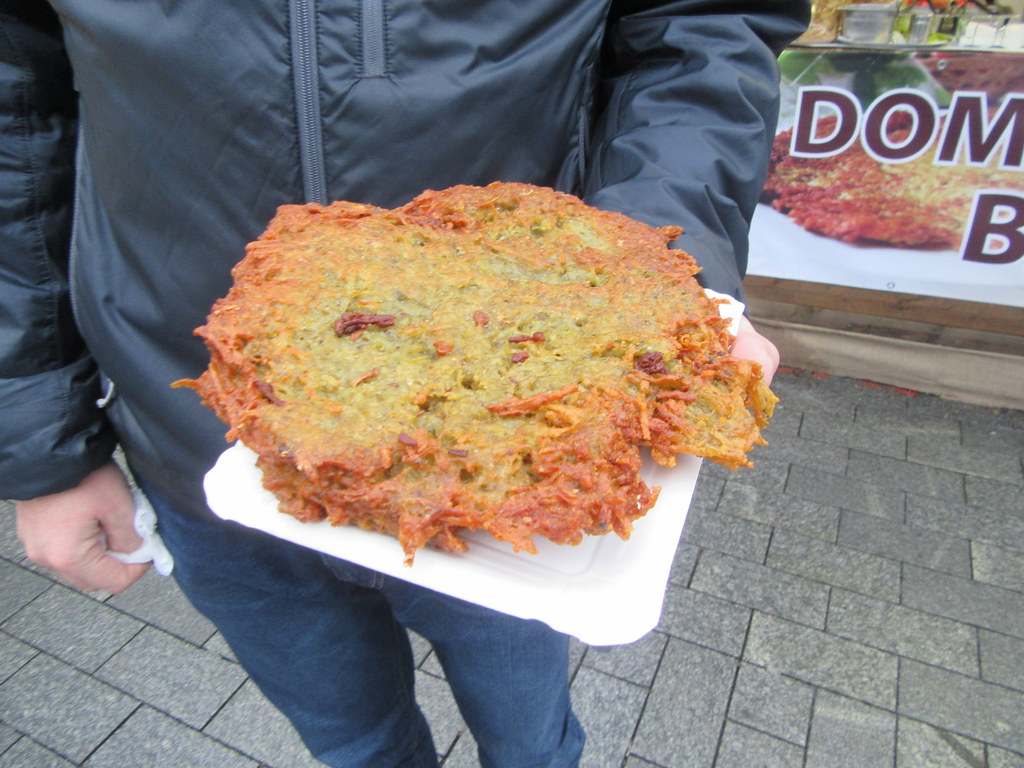 “Bramboraky potato pancake from Christmas market Brno Czech” by amanderson2 is licensed under CC BY 2.0.

Bramboráky are hearty potato pancakes made of grated potatoes, eggs, grated garlic and spices such as marjoram and pepper. They are prepared either thick and soft or thin and crispy, and should ideally be enjoyed while still warm! In the Czech Republic, they are usually served with mustard and ketchup. Whereas in Germany, where a similar variation of potato pancakes is very popular, they are usually served with applesauce. 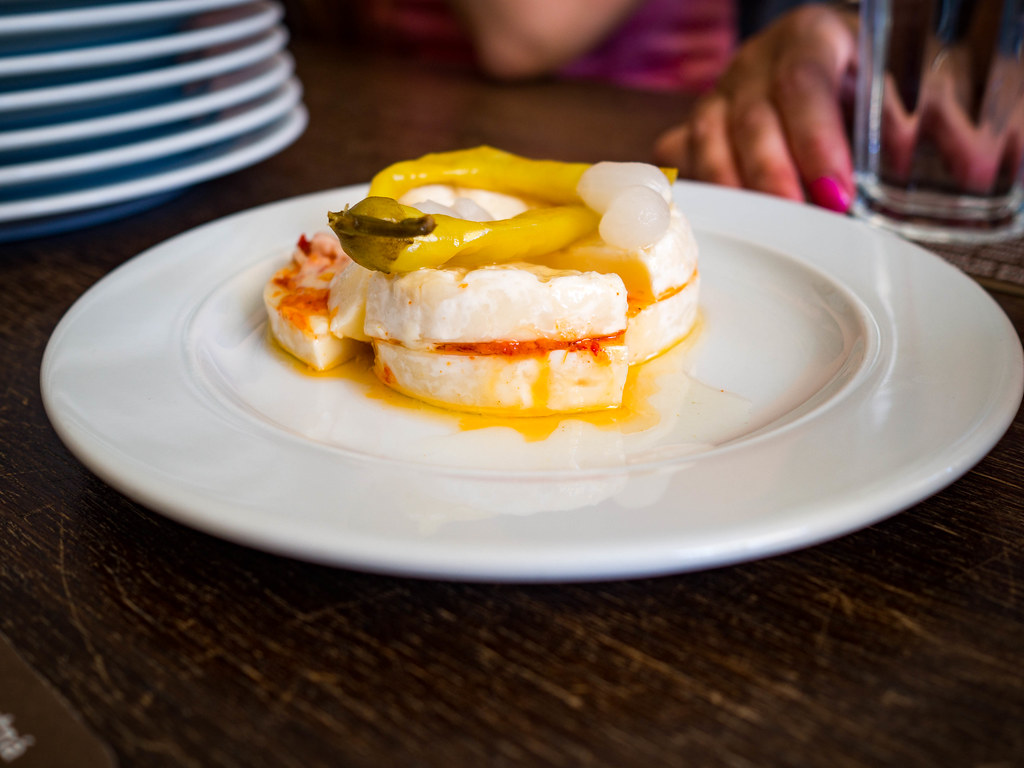 Nakládaný Hermelín is pickled Camembert and a favorite snack in pubs. Another Czech pub specialty is Utopenci, which are pickled sausages. 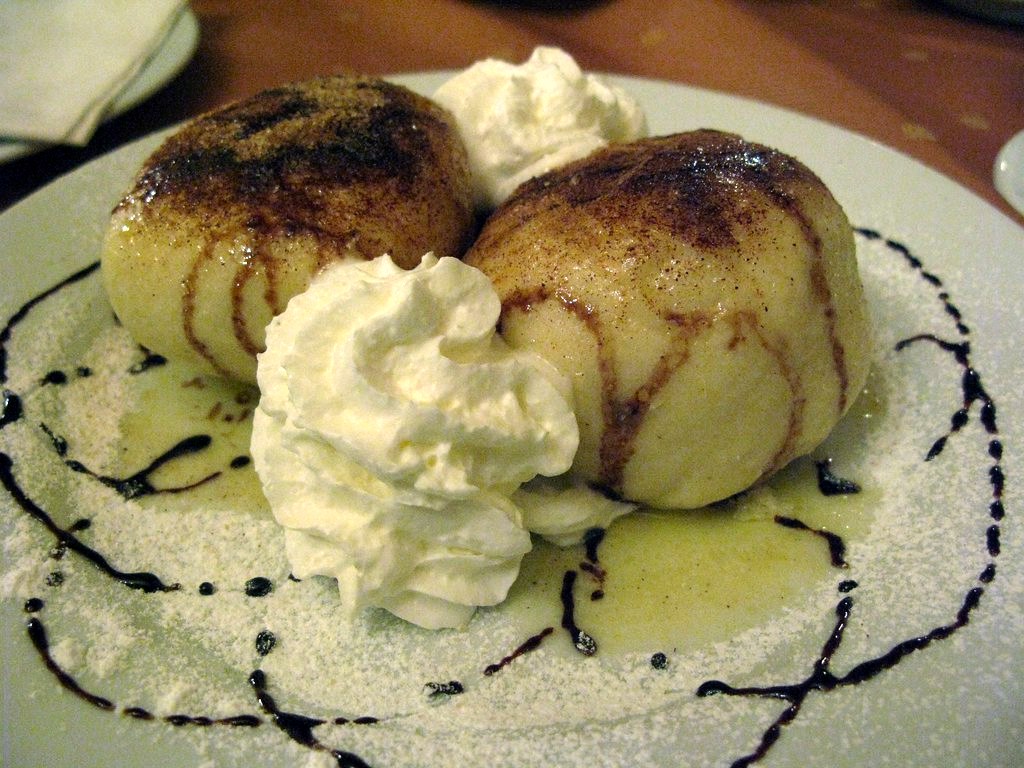 “Fruit dumpling” by James G. Milles is licensed under CC BY 2.0.

Fruit dumplings are a traditional dessert of Czech, Moravian, Austrian and Bavarian cuisine. They are usually formed into a ball, made of yeast, curd or potato dough and filled with various kinds of fruit or with jam or marmalade. Delicious! 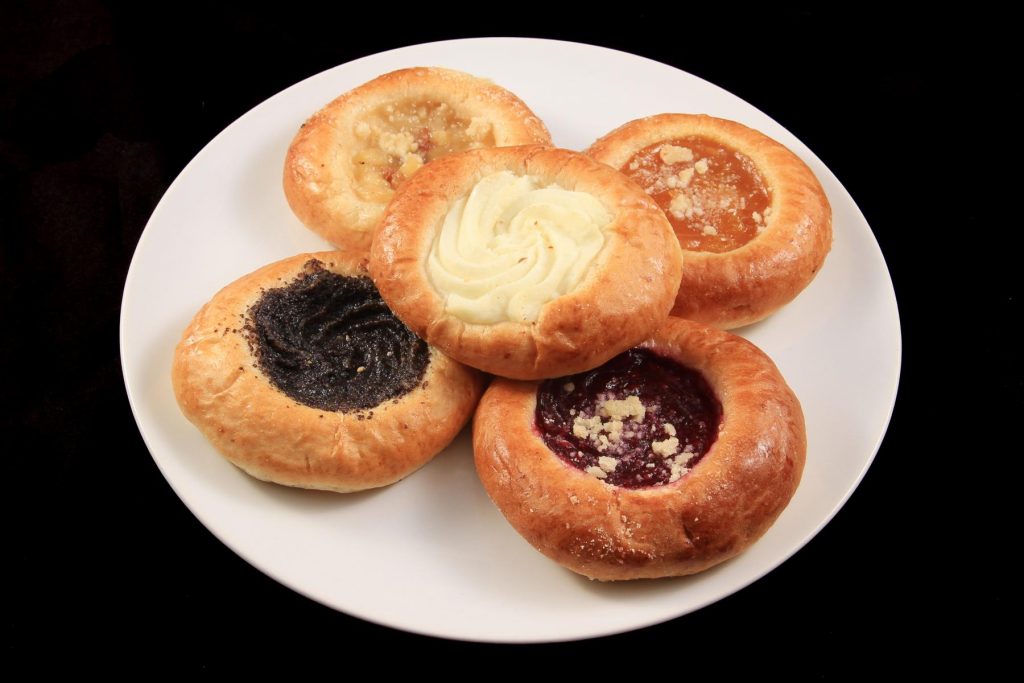 “File:Kolace.jpg” by Jakub Holzer (WMCZ) is licensed under CC BY-SA 4.0.

Koláče is a round yeast pastry enjoyed either plain or filled and sprinkled with sweet crumbs or sugar. They are usually filled sweetly, but can also be eaten savory. The most popular fillings include poppy seeds, cottage cheese, jam and walnut. In some regions, they are also made in a large pizza-shaped version and then called “frgály”. These are usually filled with apple, pear or plum jam. 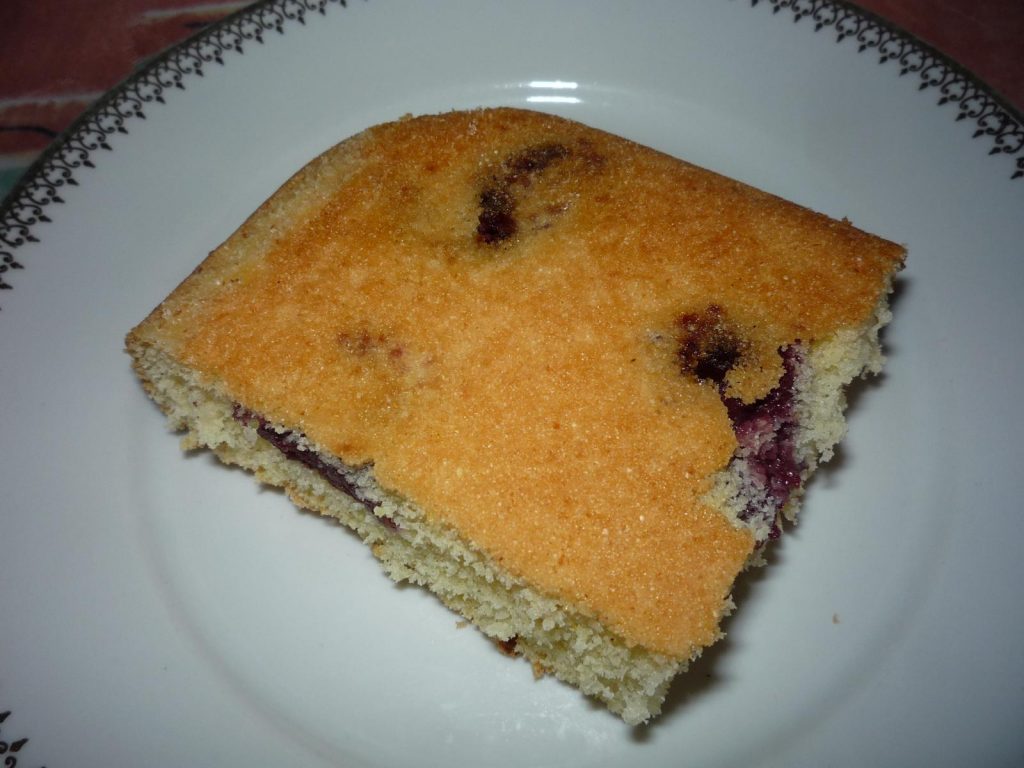 Bublanina is a simple, yet traditional and very delicious, Czech sponge cake. The light sponge cake is topped with various fruits and sprinkled with powdered sugar. Especially popular fruits for this are cherries and plums. Ideally, Bublanina is eaten while still warm. 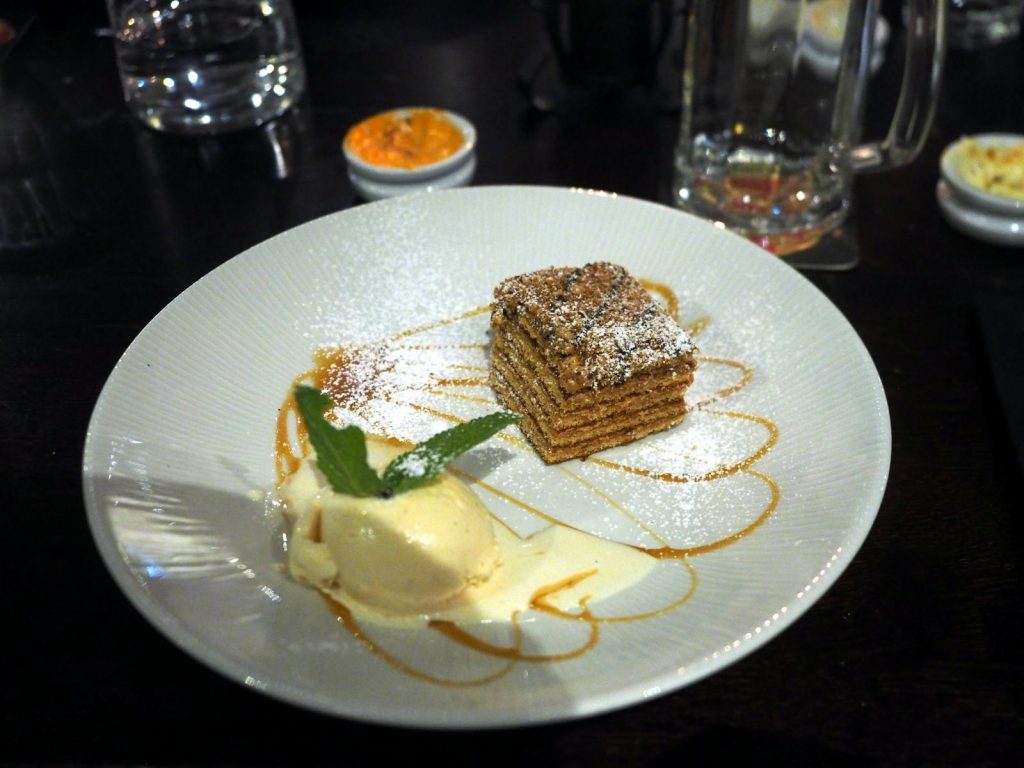 “File:Marlenka at restaurant Vltava.jpg” by JIP is licensed under CC BY-SA 4.0.

Czech Marlenka is based on an old Armenian family recipe brought to the Czech Republic by Armenian Georg Avetisjan in 1995. The Marlenka is a layered honey cake covered with nuts, which is known as “Medownik” in other Eastern European countries. Contrary to what one might expect, Marlenka can be found mainly in supermarkets. It is very popular and can be found all over the country, and is even exported to other countries!
I really like it, but it might be too sweet for some people. 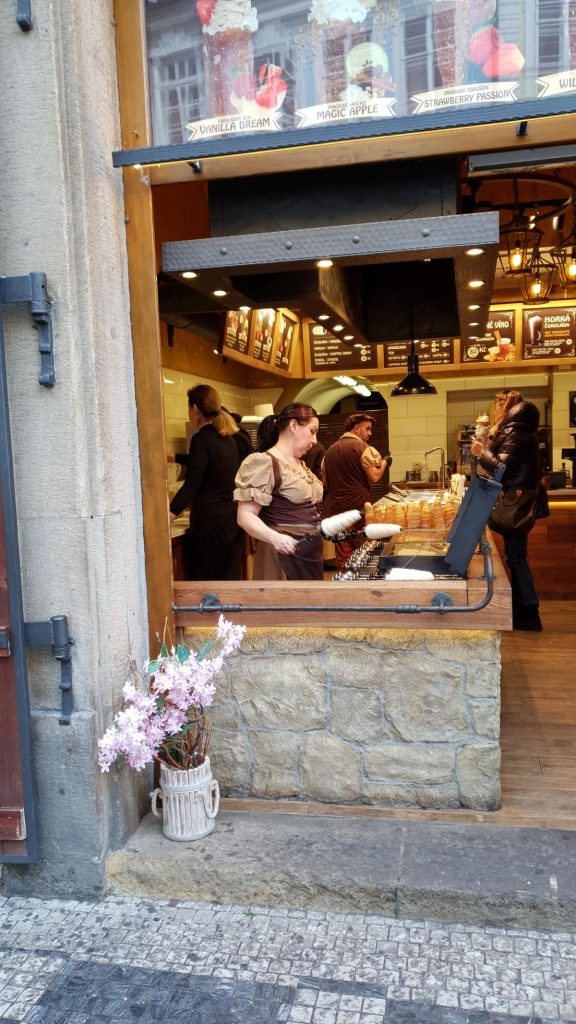 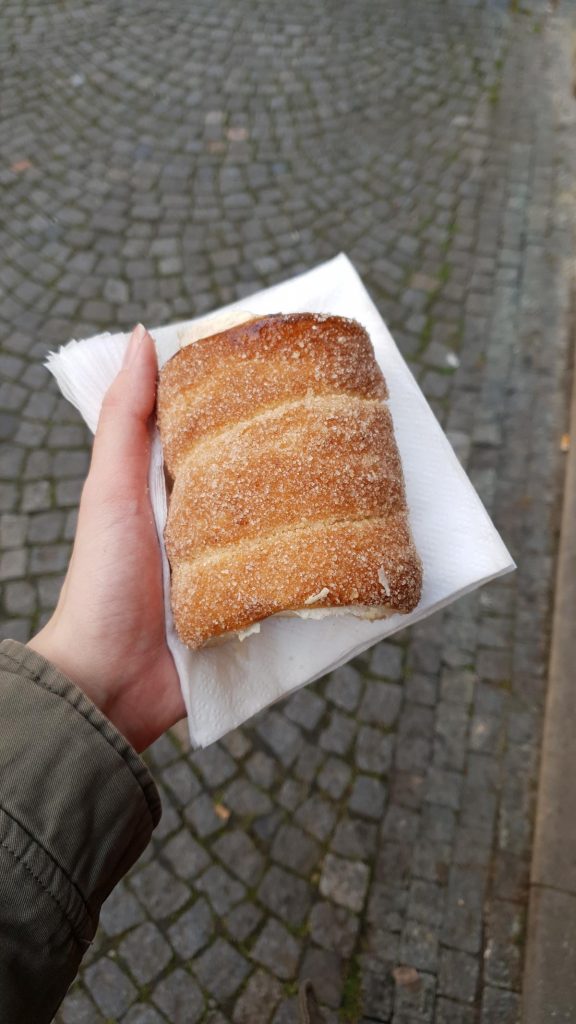 Trdelník are a Hungarian specialty, which is very popular in the Czech Republic. It is a cake made of yeast dough, baked over an open fire. After baking, the freshly baked trdelník (Hungarian: “Kürtőskalács”) can be additionally sprinkled with ground walnuts or cinnamon powder. Or be filled with ice cream or whipped cream. 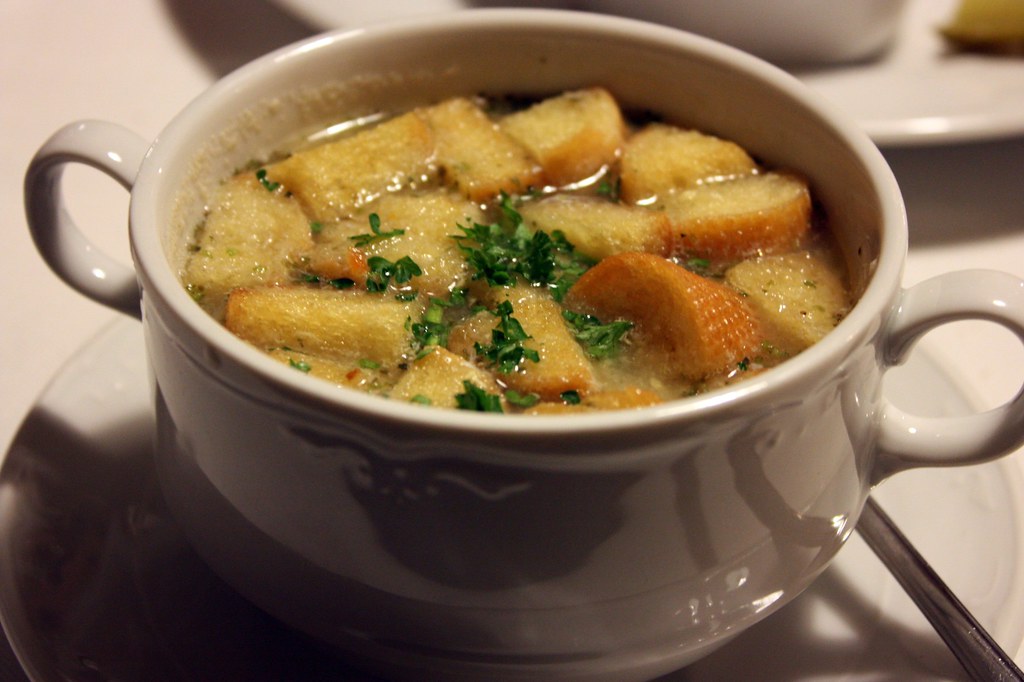 Perhaps not as unusual as other dishes in this category, but Česnečka is a Czech garlic soup. In addition to a high number of garlic cloves, the soup also contains potatoes and spices such as caraway and marjoram. It is traditionally served with toasted bread cubes, but occasionally also with lard/butter and grated cheese. 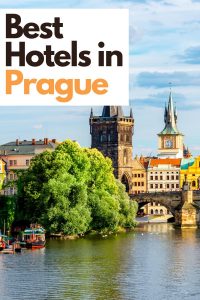 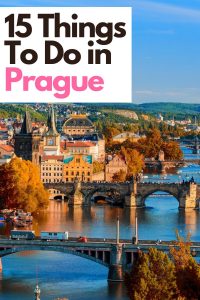 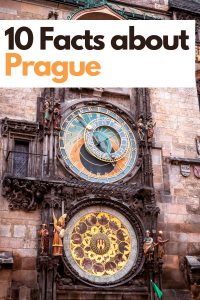