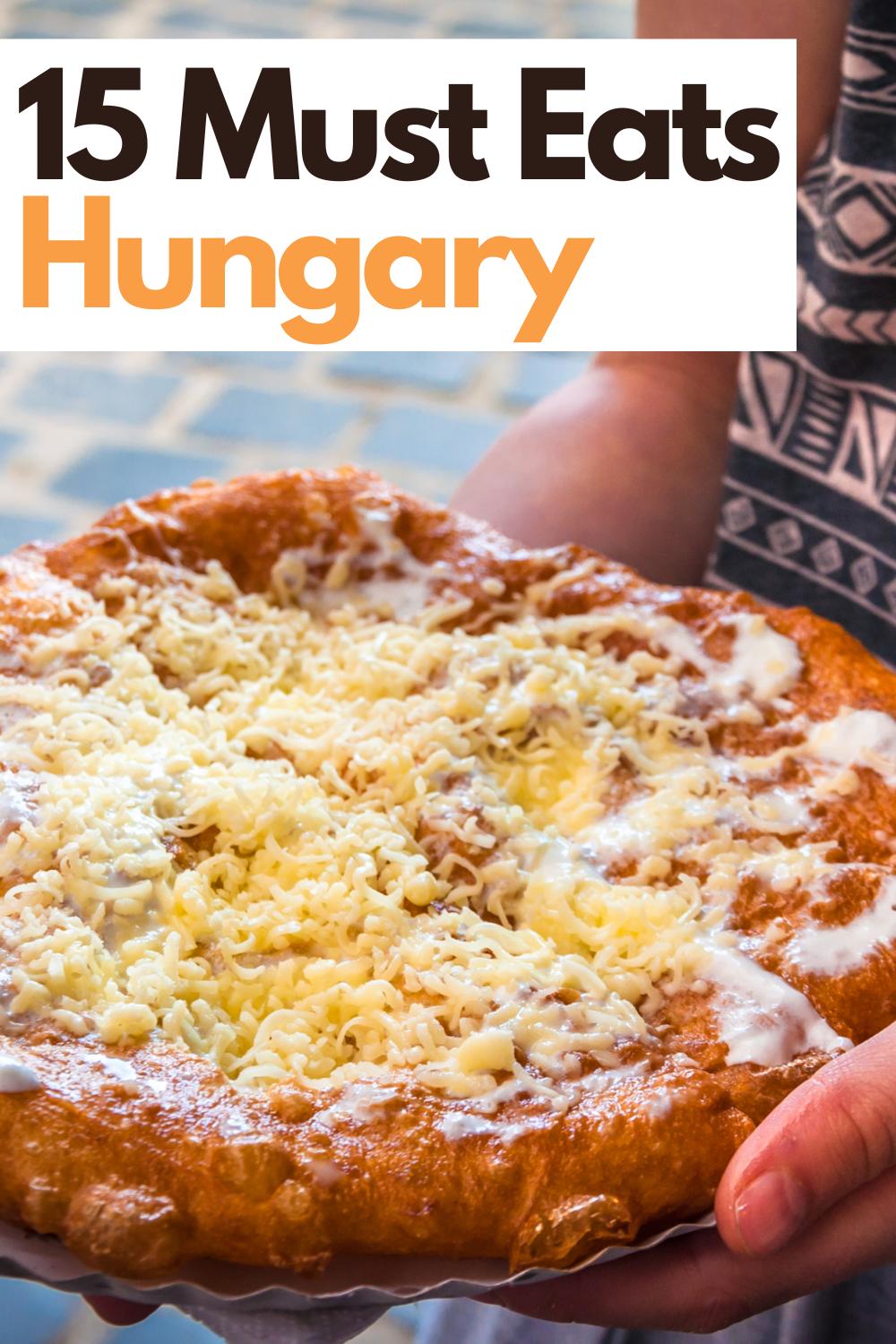 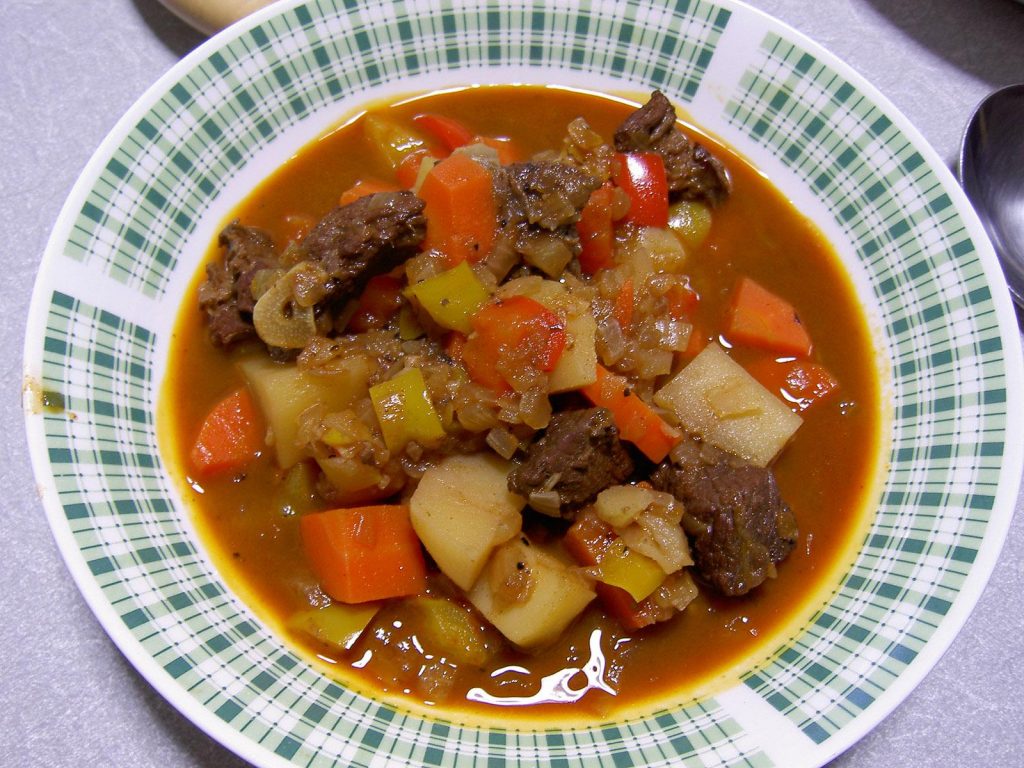 “Hungarian Gulyás” by m.louis is licensed under CC BY-SA 2.0.

Gulyás is a soup-like ragout and is considered the national dish of Hungary. The main ingredients include onions, meat, bell peppers, potatoes, and various spices. Traditionally, Gulyás is served with csipetke pasta or bread and is mainly enjoyed as a hearty main dish.

What is called “goulash”, “gulyas” or “goulash” in all other countries is the pörkölt or paprikás (the next item on this list) in Hungary. While in Hungary gulyás is a soup. 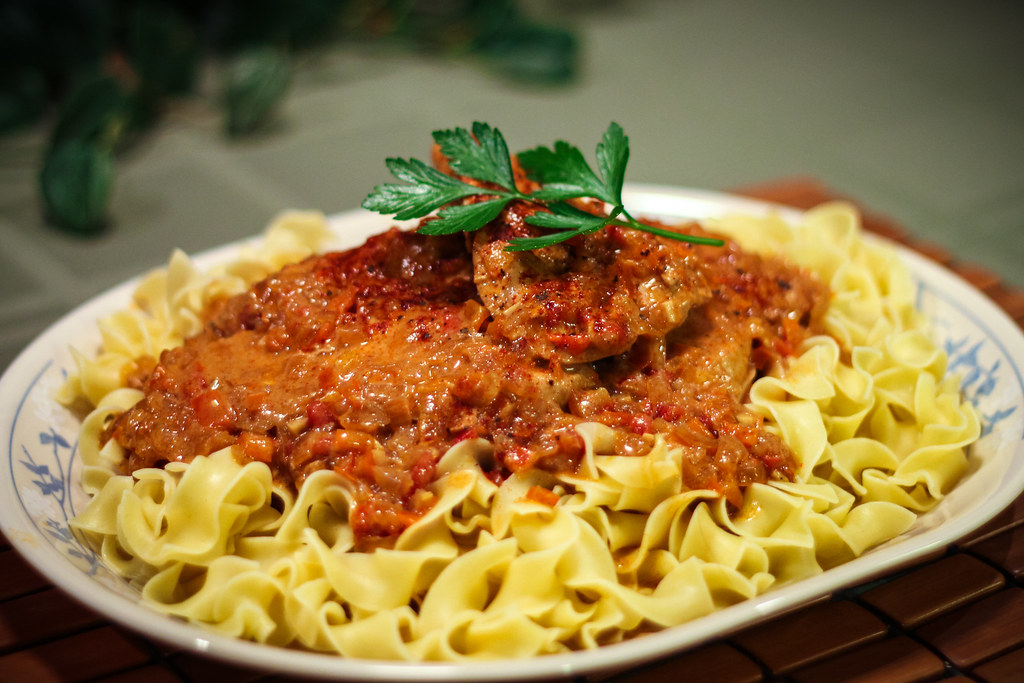 “Chicken Paprikas” by Chris Potako is licensed under CC BY 2.0.

Pörkölt is a dish of Hungarian cuisine, consisting of diced meat in a spicy sauce. What is known around the world as “Hungarian goulash” is a pörkölt or paprikás in Hungary. Pörkölt does not contain sour cream and is called paprikás when sour cream is added. A popular variation of this is chicken paprikash (paprikás csirke), which as the name suggests contains chicken meat and is popular in many parts of the world. 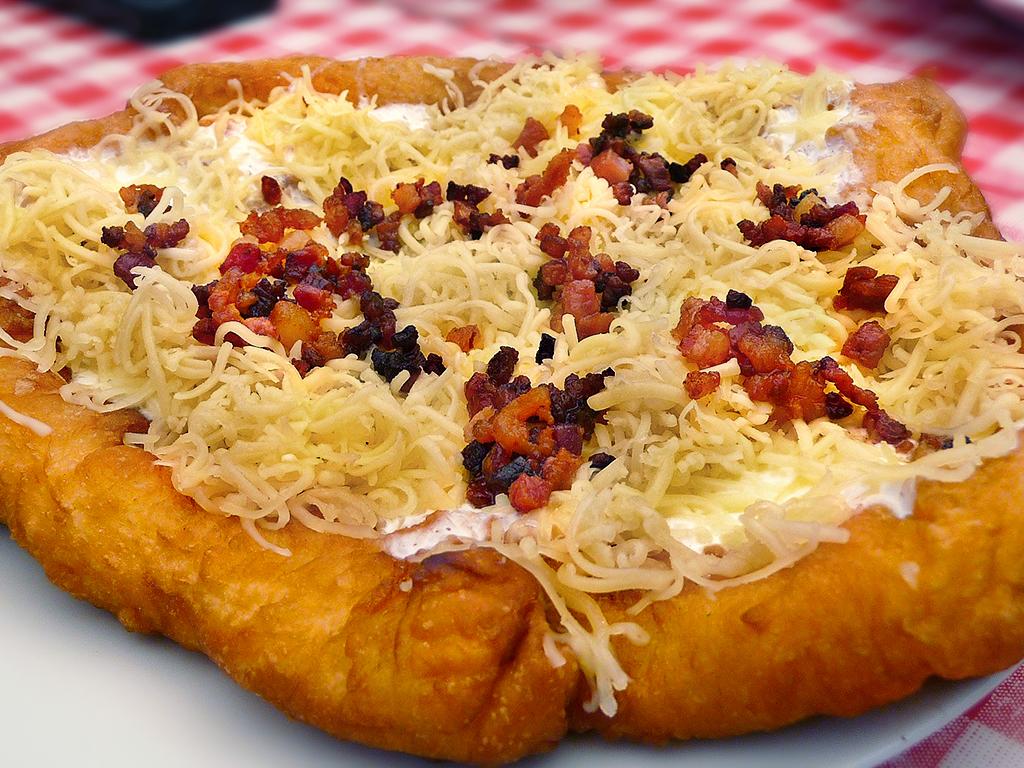 Lángos (Hungarian: flame) is a specialty of Hungarian cuisine. It is a yeast dough that is deep-fried. It is as delicious as it sounds. Traditionally, it is eaten fresh and warm as a snack. You can eat it plain or choose from a variety of toppings. The most popular toppings are savory ones like sour cream, grated cheese, and garlic sauce. 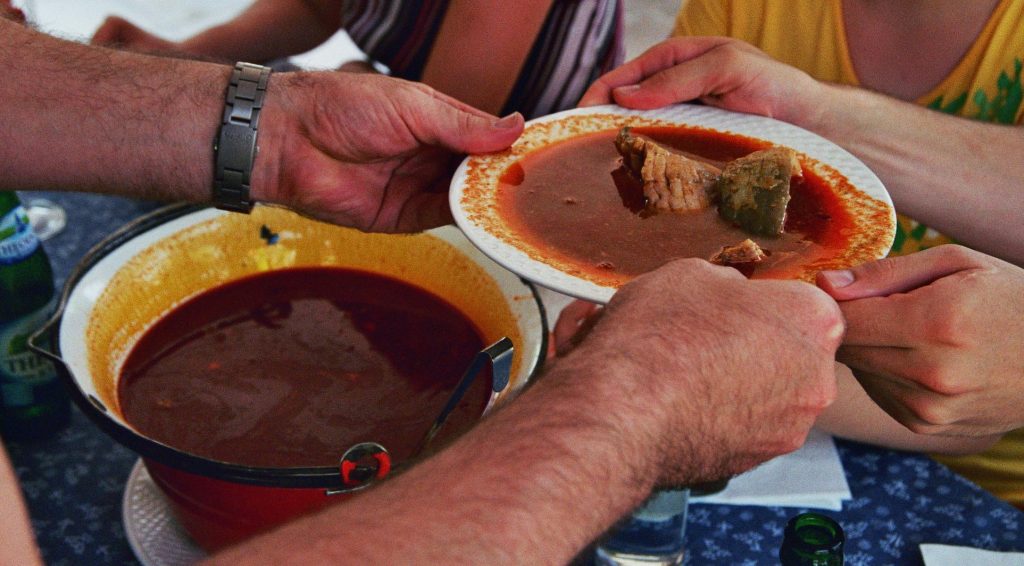 Halászlé is a Hungarian fish soup. Again, two of the main ingredients are onions and peppers.  The fish used is usually roach, catfish, bream, or also carp.  The fish used may vary depending on the region, and in some regions, pasta is also used. 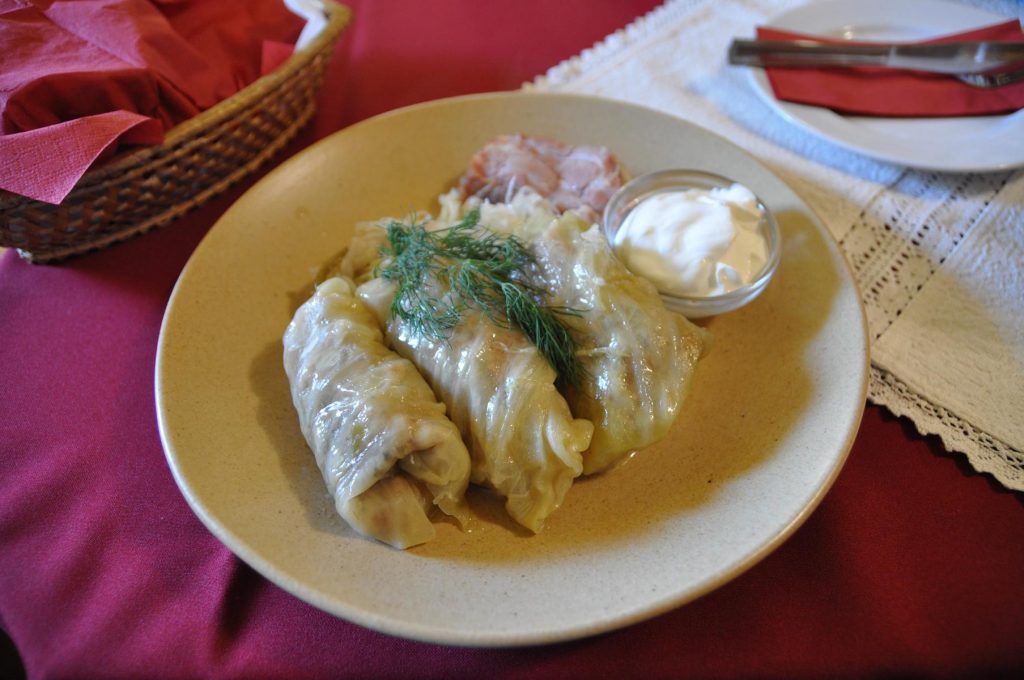 “File:Töltött káposzta, 2.jpg” by Christo is licensed under CC BY-SA 4.0.

Töltött kaposzta are Hungarian cabbage rolls. Cabbage rolls originated in the Byzantine Empire and are still popular in the German-speaking countries of Europe as well as in Eastern Europe. Töltött kaposzta are mostly filled with rice, minced pork, and onions. They are usually served with sauerkraut and sour cream. 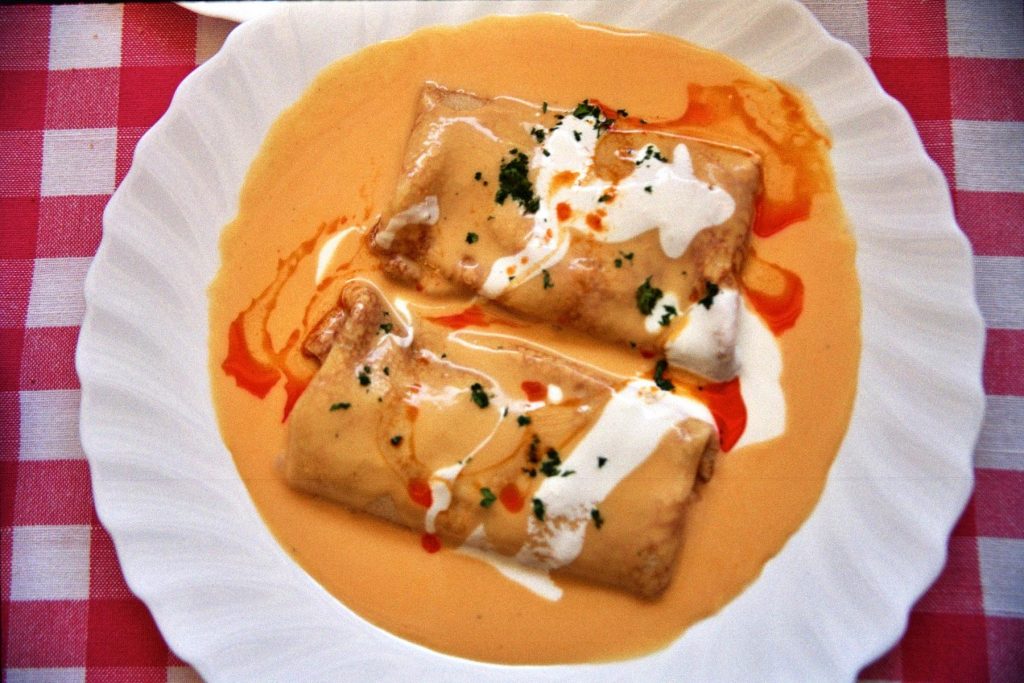 From stuffed cabbage to stuffed crêpes.  Hortobágyi palacsinta is a savory crêpe usually filled with veal. The meat is usually prepared like a stew with tomatoes, onions, spices, and sometimes mushrooms. The pancake rolls are then usually served with paprika and sour cream sauce (tejföl).

It was apparently invented for the 1958 Brussels World’s Fair and, despite its name, has nothing to do with Hortobágy National Park. “Warm Colors- my Mom’s Hungarian Lecsó” by zeevveez is licensed under CC BY 2.0.

Lecsó is a stew dish of Hungarian cuisine, which basically consists of bacon, white Hungarian pointed peppers, tomatoes and onions, seasoned with salt and pepper. Letcho is a main meal in Hungary, not a side dish, so it is sometimes prepared with egg barley. 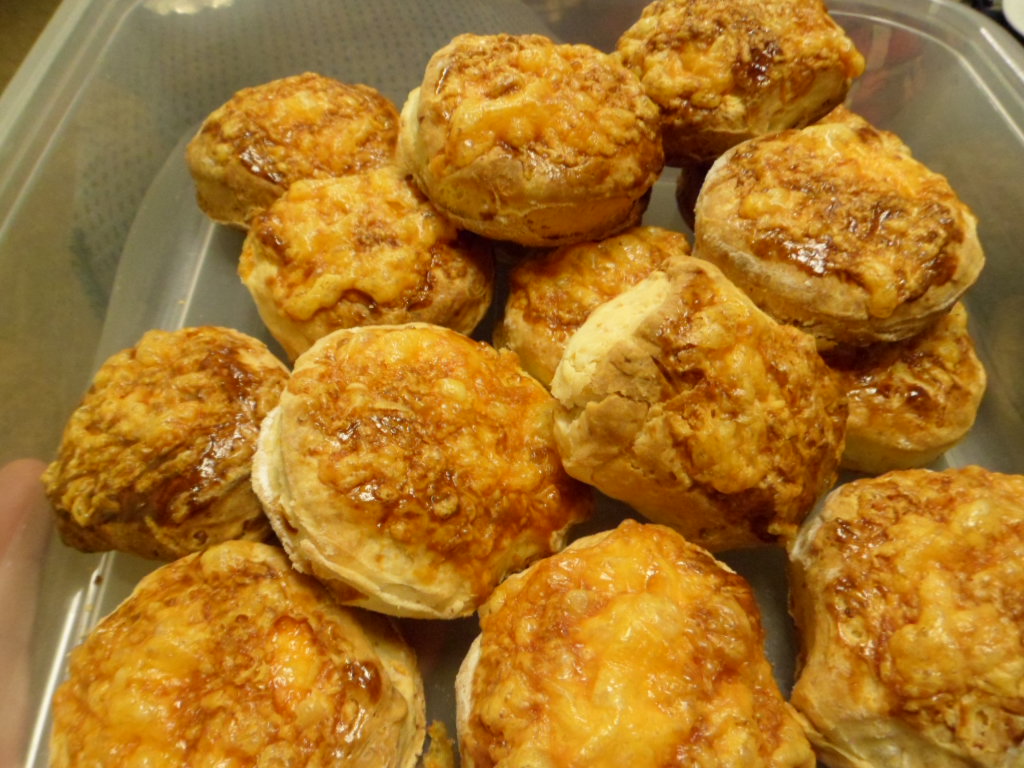 “Hungarian pogácsa” by Audreys6 is licensed under CC BY 2.0.

Pogácsa is a popular Hungarian snack that is best eaten while still hot. It can be served as a sweet or savory snack. Its many variations include cheese, cabbage, potatoes, bacon and pumpkin seeds. 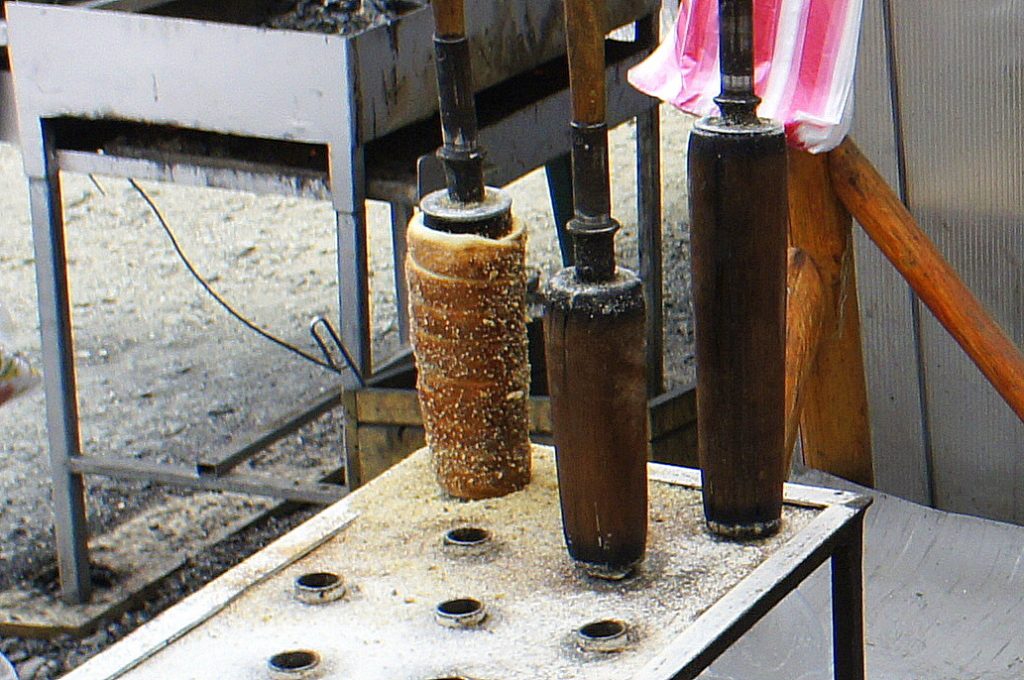 If you’ve been to Prague in recent years, you may have seen Kürtőskalács on every corner, but it’s actually a Hungarian/Romanian dish. It is a cake made of yeast dough baked over an open fire. After baking, the freshly baked Kürtőskalács can be additionally topped with ground walnuts or cinnamon powder. Or be filled with ice cream or whipped cream.

This pastry is also popular at Christmas markets and is popularly called chimney cake. 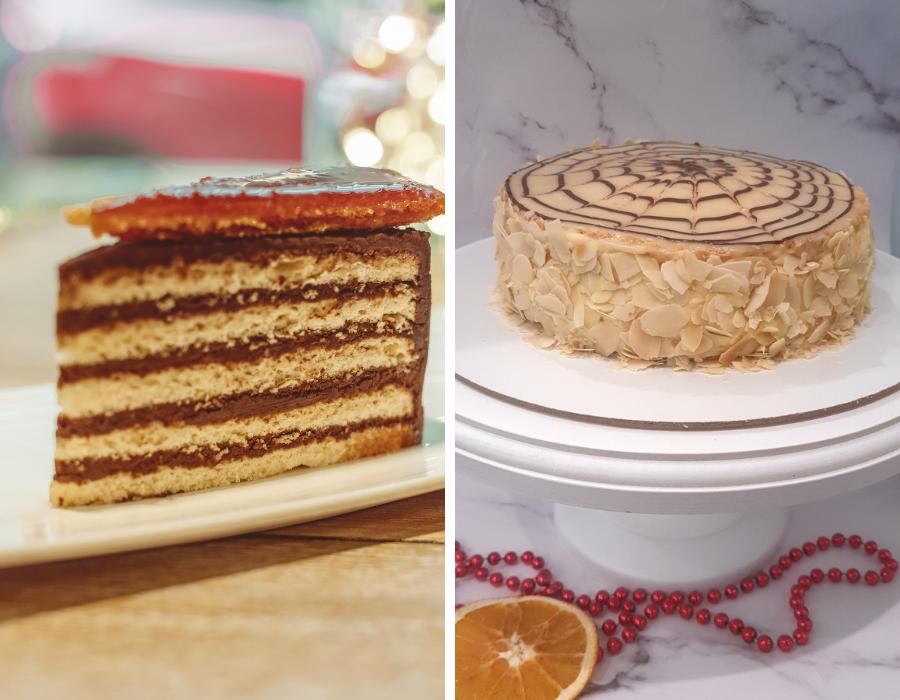 Dobos torte is probably the most famous Hungarian cake. It consists of six layers of sponge cake, five layers of chocolate buttercream, and caramel icing. This delicacy was named after its inventor, the Hungarian master confectioner József Dobos (1847-1924).

Another popular Hungarian layer cake is the Esterházy torta Zserbó. The traditional version consists of several layers of almond meringue and a rich vanilla buttercream spiked with cognac. In modern versions, the almonds are often replaced by walnuts or hazelnuts. Besides Hungary, it is also popular in Austria and many other Central European countries. 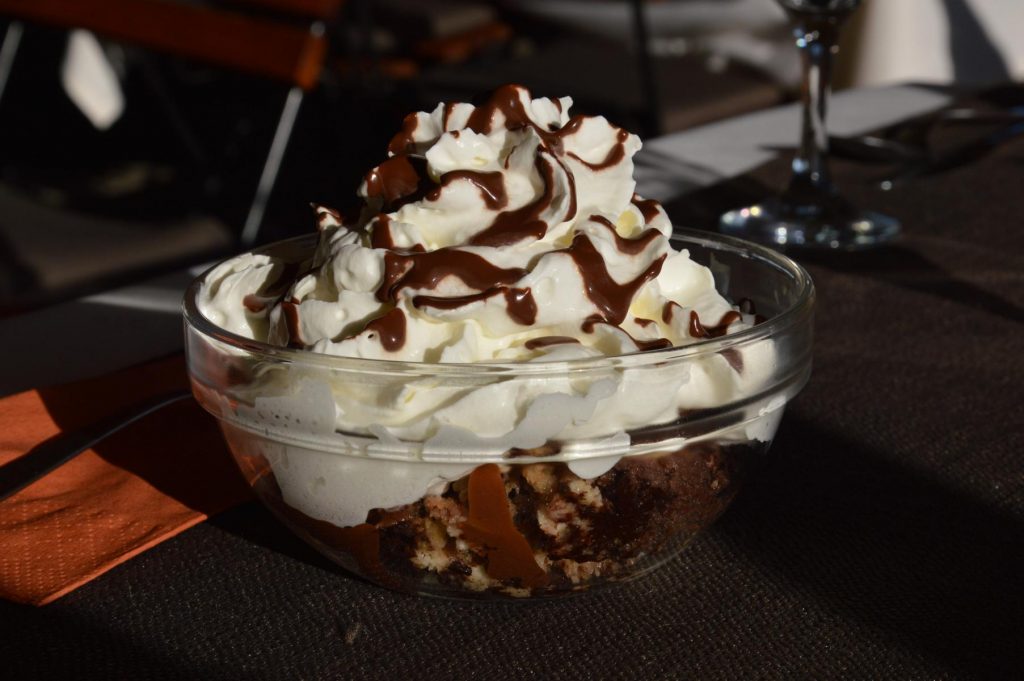 Somlói Galuska is a traditional Hungarian dessert. It is two kinds of sponge cake with vanilla pudding, rum raisins, and chocolate sauce. They are also offered in Austria in many restaurants under the name “Schomlauer Nockerl”. 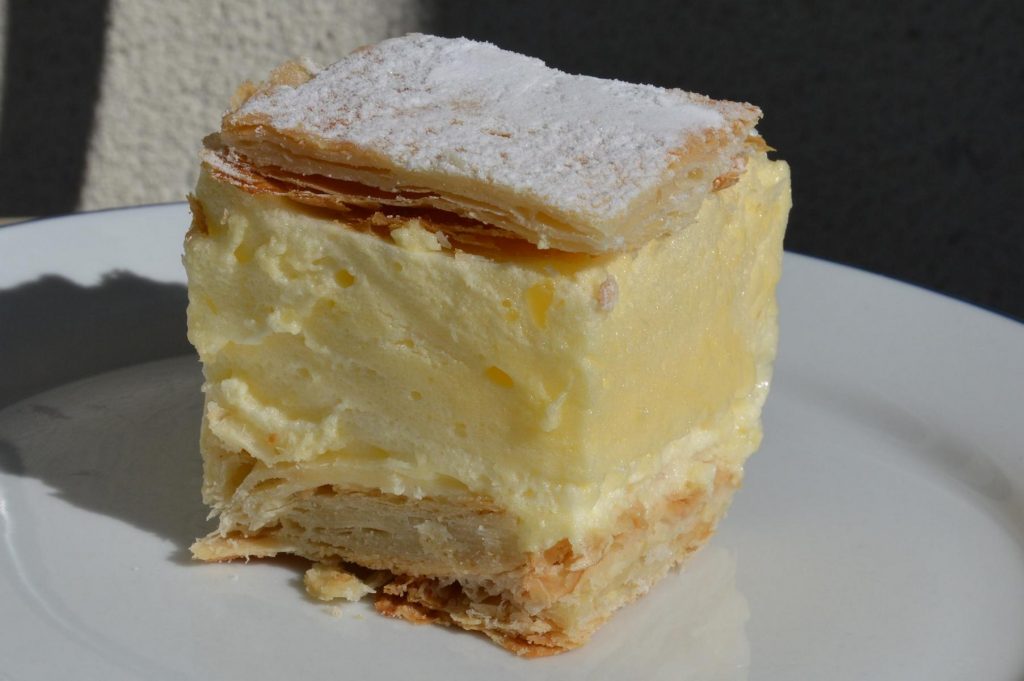 Krémes shares its origin with Austria and is a cake made of puff pastry filled with vanilla cream and sprinkled with powdered sugar. It sounds simple, maybe it is simple, but it is just so delicious! 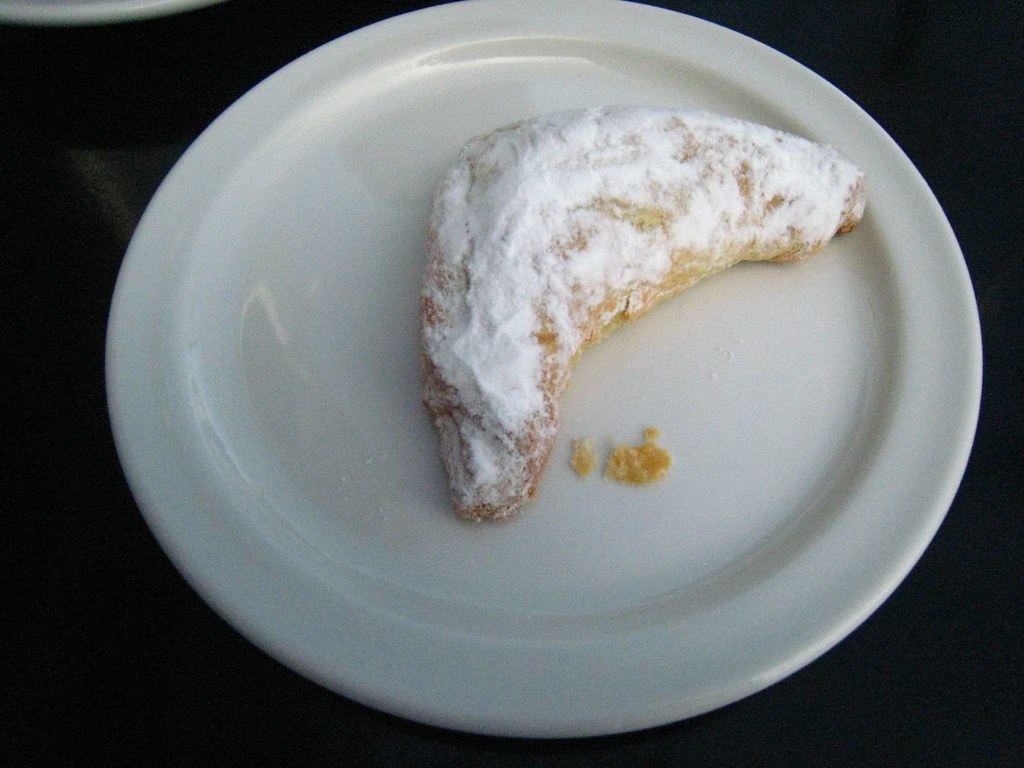 Kifli are crescent-shaped yeast rolls. They can be prepared both sweet and salty. In the sweet varieties, fruit jam, honey and powdered sugar are particularly popular. Those who prefer it savory can also enjoy their kifli sprinkled with sesame seeds, poppy seeds or caraway seeds.
Today, kifli are traditionally baked at Christmas. And not only in Hungary. There are different varieties of kifli all over Europe, but here they often use shortcrust pastry instead of yeast dough, which makes for a completely different taste. 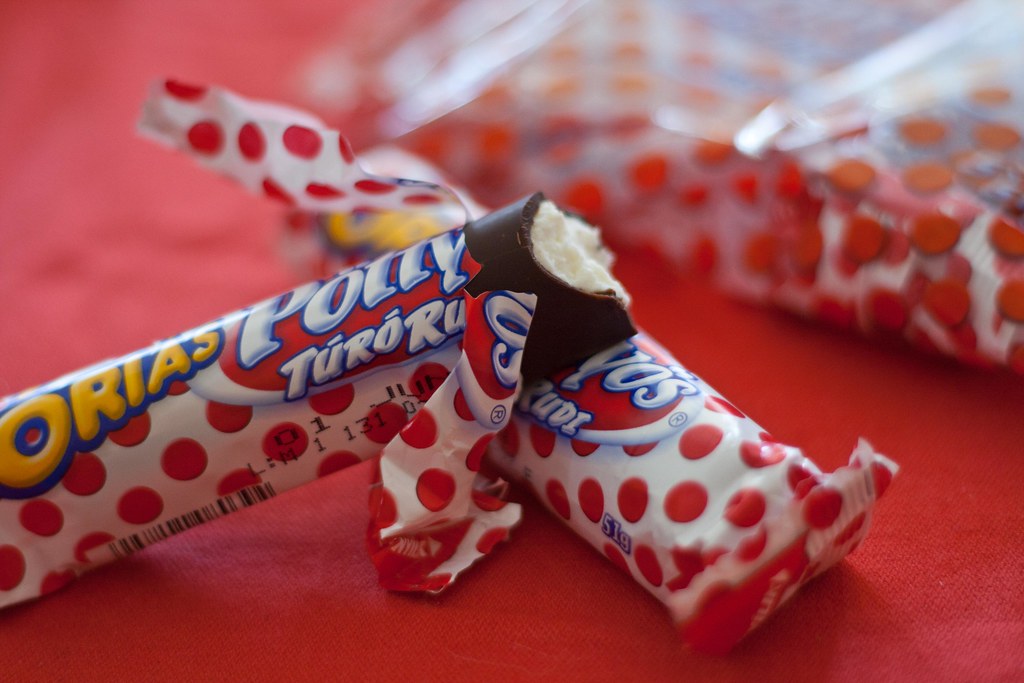 Túró Rudi, a chocolate bar filled with a curd preparation, is a well-known specialty in Hungary. “Túró” in Hungarian stands for curd cheese or curd cheese. It is also very similar to Estonian kohuke. 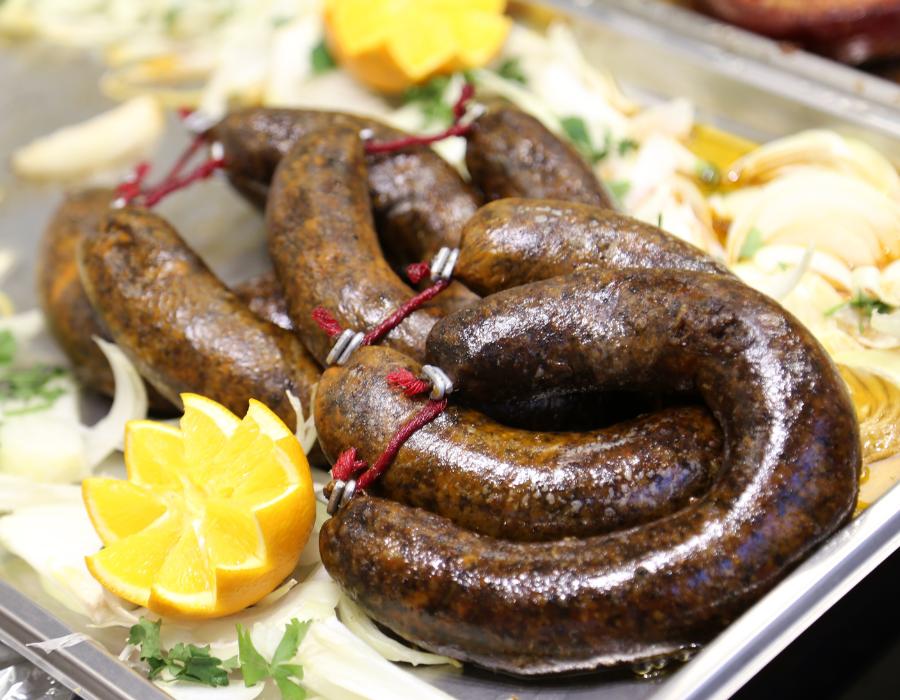 Maybe I should stop listing blood sausage under “unusual” since so many countries have it in their national dishes. Hurka is the Hungarian blood sausage. Blood sausages usually contain animal blood, fat and meat, and a variety of spices. 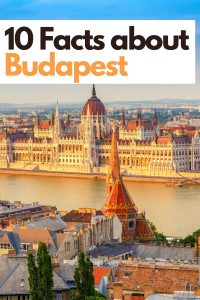 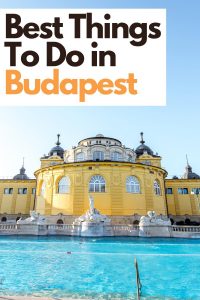 15 Best Things To Do in Budapest Hungary 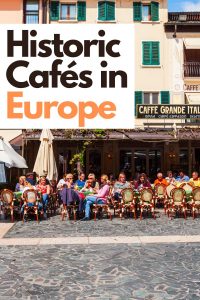